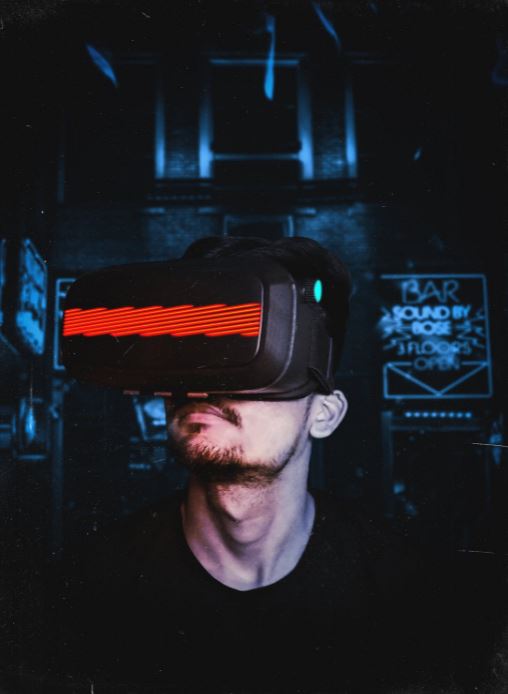 Why Get Top Rated VR Headsets?

Virtual reality is an enthralling method to travel that relies solely on technological prowess. VR allows you to see around a virtual world as if you’re actually there, or play a game as if you’re in it, using a headset and motion tracking.

Virtual reality has gained traction in recent years as a result of fascinating games and experiences, but it still appears to be in a state of change, with VR headsets appearing and going at a quick pace. Here, we’re keeping an eye on the best of what’s available on the market. 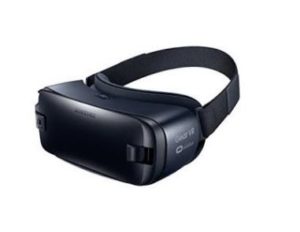 The Gear VR smoothly integrates with Galaxy smartphones (except the Note 7) via the built-in micro USB port to give the most comprehensive virtual reality experience available from a Galaxy smartphone. It also has an accelerometer, proximity sensor, and gyro sensor so you can feel the feedback and change the virtual world accordingly.

The Gear VR’s head-tracking is as smooth as it has always been. This is no doubt due to the Oculus chip inside the headset, which meticulously tracks your head motions. However, because there is no external camera or sensor, you cannot move around within your virtual world or lean out and over to peer down an abyss, for example.

The Samsung Gear VR headset display quality is determined by the phone being used. The Samsung Galaxy S9 has a Super AMOLED panel display with a Quad-HD 2,960 x 1,440 resolution, which means games have very rapid response times with no ghosting or blurring.

Even the Samsung Galaxy S6, which has the ‘lowest’ resolution of all compatible phones, has a 2,560 x 1,440 resolution on AMOLED displays, with exceptional color accuracy and contrast ratio.

Furthermore, the phone control buttons are replicated on the headset, with the addition of an embedded touchpad for quicker controls and adjustments. This headset is comfortable to use for long periods of time when playing with content from the Oculus Store or Milk VR. 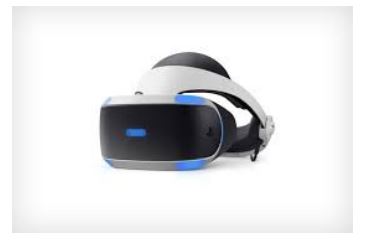 Sony’s several generations of PlayStation have pushed the frontiers of console gaming. The original Sony PlayStation VR Headset is the latest addition to their latest platform, the PlayStation 4. It’s simple to use; simply connect it to the PS4 and other original Sony devices.

The VR Headset has a sophisticated 5.7-inch OLED display and runs HD 1080p at 120 frames per second to pipe in continuous graphics for you to enjoy the PS4’s virtual world. Aside from that, 3D audio technology provides a more immersive virtual experience since aural depth adds an added element of immersion.

It combines a cool headset that looks semi-futuristic and is surprisingly comfy with a fantastic game library that is slowly developing. You can play Star Wars Battlefront: Rogue One X-Wing Mission, Eve: Valkyrie, and Batman: Arkham VR, as well as Astro Bot Rescue Mission, one of the more intriguing recent VR games.

If you own a PS4 or PS4 Pro, PlayStation VR is one of the more economical methods to play VR games, especially since you don’t require a high-end gaming PC. Nonetheless, with the initiative Move controllers and movement tracking, you get a really high-end VR experience.

But it isn’t just for games; it can also be used to make watching movies more immersive. As a result, if you’re a PlayStation fan looking to get into VR games, the PlayStation VR is a must-have.

One thing to keep in mind is that the PS5 supports PlaySation VR. The only issue is that it does not work well with the Move controllers. But there is some good news: the PSVR 2 headset is in the works, and it will include a pair of new controllers. 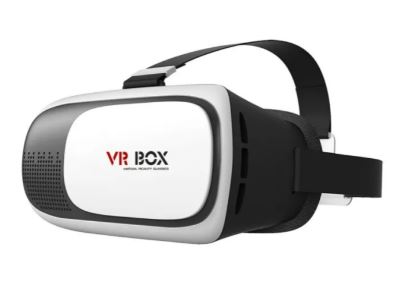 So you want to try virtual reality but don’t want to pay a fortune? VR BOX 2.0 is a good choice! This VR headset is a low-cost, entry-level virtual reality headset. The design is based on the Google Cardboard VR Box from a few years ago, and the kit is a great way for tightwads everywhere to get started with VR.

This is lightweight and simple to use, and it can accommodate any smartphone that fits in its holder. It is particularly useful for converting your smartphone into a widescreen movie theater for one.

The VR Box 2.0 has a three-strap harness that can be adjusted. This design not only locks the headset to your head, but it also removes part of the weight off your face from the goggles. Soft padding surrounds the area where the headset rests against your face. This results in a more comfortable fit. However, the padding and headset aren’t very breathable. As a result, while using the headset, your face may become warm.

Although there are no built-in headphones, there is a hole in the headset for the wire of your headphones. As a result, for audio, you can use any headphones or earphones.

The lenses’ adaptability is one of the VR Box 2.0’s more striking features. Many headsets lack adjustable lenses. The lenses are connected for those that do. As a result, you must change them both at the same time. Unfortunately, our eyes do not always have the same level of visual acuity. As a result, being able to change the lenses individually is beneficial. 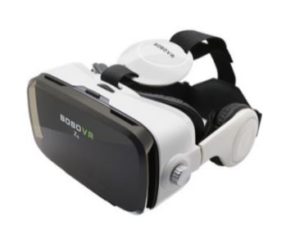 The BoboVR Z4 provides a high-quality VR experience for users of smartphones ranging in width from 4-6 inches. The visor is designed to sit securely on the user’s face, preventing light leaks from disrupting the experience, and it comes with built-in high-quality headphones to complete the 3D experience.

It comes with a Bluetooth controller for greater control in the virtual environment, which is useful for both gaming and productivity apps.

According to the manufacturer, the BoboVR Z4 features a 120-degree field of view. This is more than the Oculus Rift, HTC Vive, or Samsung Gear VR, which have 110, 110, and 96 degrees of field of view, respectively.

If you purchase the headset with headphones, it weighs 15 ounces and 11 ounces without. The Gear VR, by comparison, weighs 12 ounces. However, the headphones are convenient, and the sound quality is rather good. There’s also a volume control dial on the headset itself. 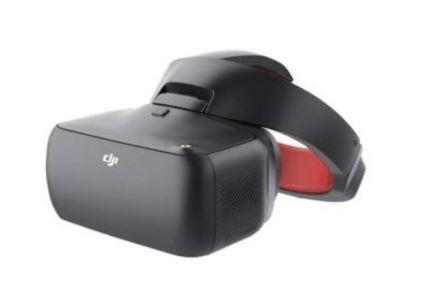 Another high-end VR headset for the PC is the DJI Racing Edition VR Goggles Headset. It has complete 1080p HD screens, direct connectivity, and 12 selectable transmission channels, as well as a drone with a range of up to 7km, to deliver a high-performance VR flight experience. In addition, the headset has HDMI input to supplement the HD screens provided.

The DJI Goggles have a 1080p video resolution, you can get that resolution on each of your two displays. Each eye gets a 5-inch display with an 85-degree field of view. With a total visual resolution of 3840×1080, the result is one of the most immersive VR experiences available.

DJI’s connection technique is known as OcuSync. It’s a proprietary setup that lets a drone like the Mavic Pro connect to several peripherals over long distances. Connecting the Mavic Pro to two DJI Goggles and you can view HD live streaming video over short distances or 720p video a mile or more away.

One of our favorite features of the DJI Goggles is that it can be used to control the Mavic Pro. You can’t control the entire drone with your head, but you can control the gimbal and even turn the craft. Head Tracking allows the camera to point where your head is, but the drone is still flown by a pilot using a remote control. 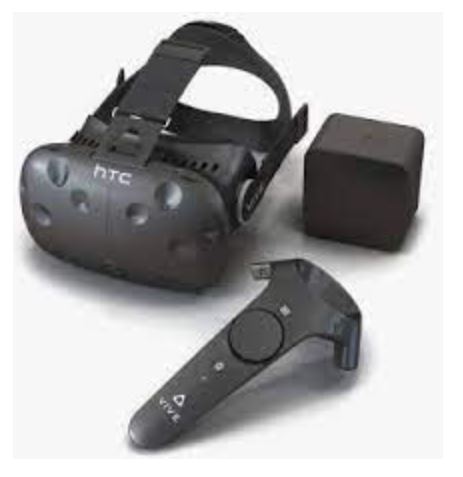 The HTC Vive was hailed as being centuries ahead of its nearest competition, the Oculus Rift, when it was first released. Although the gap has narrowed, the new HTC Vive remains the undisputed king of the hill, with excellent room scale tracking and object detection at 4.5 X 4.5 meters, allowing you to completely immerse yourself in virtual environments, according to the size of your room, of course. The set’s two 1080p screens are the highest resolution currently available in a commercial VR set.

Other enhancements include complete Steam VR support, numerous eye based adjustments, and two ergonomic wireless controllers for more natural and intuitive interactions. The drawback is, of course, the price, as this baby is only available to those with deep pockets.

The controls are also noteworthy, providing a more novel sense of being able to physically reach out and grab things, albeit by pressing a trigger rather than grabbing with your hands. Despite competing VR headsets catching up to the HTC Vive, the virtual experience remains quite awe-inspiring.

The main thing to keep in mind here is that it necessitates extra tracking sensors, a powerful PC, and a fair amount of setup and space. As a result, it may not be the greatest VR headset for people who live in small apartments. 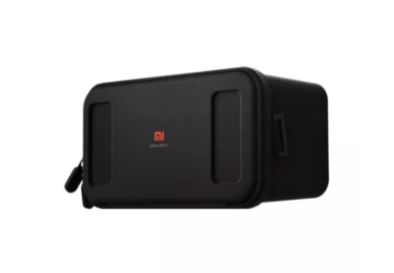 This brand new Xiaomi offering delivers a higher quality VR experience to the masses at a reasonable price. It is compatible with smartphones ranging in size from 4.7 to 5.7 inches and is made of a robust Lycra material that keeps the weight down for extended use without causing neck ache. At the same time, the dual front holes allow for minor positioning changes and ventilation.

It is comparable to the Google VR Box, but with certain design changes and higher-quality materials, allowing the Xiaomi VR glasses to provide an enhanced VR experience with support for panorama videos and photographs. Simply insert a smartphone to start having fun!

The lens is the most important aspect to consider when purchasing a VR headset. As a result, Xiaomi has incorporated an anti-dazzle lens in their VR glass to provide their users with a clear vision of anything they watch through it.

You can also watch panorama films and photographs with the help of this VR glass. Moving on to the button of this VR glass, it is discovered that it is formed of thread metal, which can last for a long time even when performing strong movements.

A standalone VR headset is a VR device that may be used without being connected to a computer or console. The headset is packed with gadgetry, sensors, and internal memory, and it can access content via the internet and smartphone apps.

This enhanced flexibility comes with certain trade-offs: the device will be less powerful, and some apps and games may be unavailable.

A PC-powered or PC-connected headset is a virtual reality device that is connected to a computer via a cable or wireless connection. These devices are more powerful than their standalone equivalents, but they may require room sensors and might be more time-consuming and technically demanding to set up.

Because the PlayStation 4 is the only system that presently supports VR, the console VR headset effectively replaces the PC connection. This may be less expensive than putting together a suitable PC rig.

These VR headsets, which combine a docking headset with a smartphone, were popular a few years ago. These are currently considered obsolete, having been surpassed by standalone headsets.

Final Verdict: Get Yours Now!

When looking for the latest VR headset, it is usually a good idea to write down your criteria in rank order – if you are on a restricted budget and know you won’t be able to purchase the most expensive, there is no use in evaluating them. Similarly, if all you want is something wireless to keep you from tripping while playing, you don’t need to look at everything on the market.

Our latest best VR headset in Malaysia list includes a small number of headsets to pick from, so selecting the correct one for you shouldn’t be too difficult.

A VR headset provides hours of entertainment and appears to be on the rise, so purchase yours today!